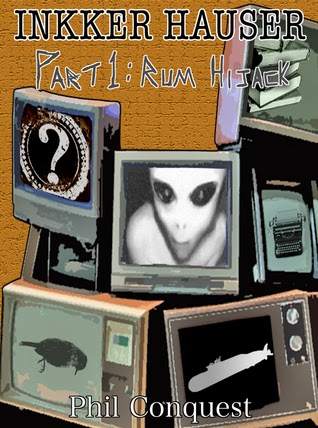 If you like stories told in the tradition of Hunter S. Thompson’s Fear and Loathing in Las Vegas, then you will love Inkker Hauser Part 1: Rum Hijack. We get to know Phil Conquest’s nameless protagonist through a first person stream of consciousness and his random collisions with other characters. Essentially, our hapless narrator is a literary legend in his own mind, despite the fact that he hasn’t actually written anything and is crippled by writer’s block.

This story is so much more than that though. Conquest hooks us in by giving his protagonist just enough harmless quirks and vulnerability that we might identify with him. He is a man of routine, eating the same food every day and appearing to be a regular at the handful of places he frequents. Like many of us, he has a somewhat schizophrenic relationship with Joe Public and the inevitable social media, displaying a healthy dose of misanthropy coupled with a desperate neediness. Once we’re hooked in, however, Conquest reveals to us that our anti-hero is probably on the wrong side of nutty as a fruit cake.

His flat is a metaphor for his mind with its chaotic jumble of smashed up furniture and numerous television sets. He seems unable to discern between what’s useful and what’s just clutter. His obsession with dead birds and submarine disasters quickly cements the idea that this character is not quite right and his heavy drinking exacerbates his mental fragility.

There is a touching poignancy about him that is almost heart breaking. He has inherited his granddad’s flat and is surrounded by older people with whom he has little in common. He is obviously influenced by his granddad, another frustrated writer, who is still very much a presence in his life despite being dead. Probably the most telling indicator of his inner loneliness is when he talks about playing dress up and his longing for a playmate.

The heart and power of this novel is its humour and I guarantee you will find an abundance of episodes that will tickle your funny bone. My laugh out loud moments included the image of our anti-hero changing into a sailor top to watch submarine videos and the way, after an evening spent trying to drunkenly connect with his granddad’s spirit, he has an exorcism style vomiting session. Best of all though is the fact that he has adopted Crocket’s theme by Jan Hammer as the soundtrack to his life.

I loved this story and can’t recommend it highly enough. Conquest is an assured, talented writer, who takes us on a hilarious journey into the mind of his wonderfully unique character.
Posted by Unknown at 15:22 15 comments:

Past Judgment (An Emma Harrison Mystery Book 1) by Wendy Cartmell 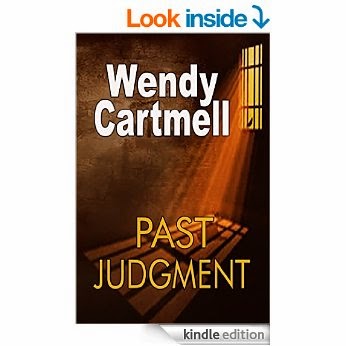 Past Judgement is a slow paced mystery, whose chief protagonist is Emma Harrison, the twenty something assistant governor at Reading Young Offender‘s Institution. When one of the inmates, Leroy Carter, absconds it leads to Emma, along with a face from her past, Sgt Billy Williams and DI Anderson to question whether there has been a miscarriage of justice.

The strength of Wendy Cartmell’s novel, for me, doesn’t lie with the mystery but with the questions it forces the reader to address via the characters she has created. I found both leading characters difficult to like and, that in itself, lends the story a gritty realism reflecting the harsh prison backdrop to which it is set.

Emma Harrison has been fast-tracked through her career and is a combination of naiveté and ambition. There is no doubt that she cares about the welfare of the inmates and sees their future redemption in education. However, at the same time, she has her eye firmly fixed on the role of governor and enjoys the power that being a young woman in a male prison brings. She finds affirmation in the literal power of being the one holding all the keys, a fact that Cartmell refers to several times and also the way her sexuality gives her power over the young men who are locked up. There are hints of Emma’s troubled past, she was brought up by foster parents and, three years prior to the story, caught up in a train hijack by terrorists. What Emma does for me is raise questions about the complex motivations of a young woman, drawn to a world that is by its very nature, male dominated.

Likewise Leroy Carter is a representation of modern Britain, a young man brought up by a negligent single mum; he drifts towards crime and drugs. His saviour comes in the form of the army but, early on in his new career, he is convicted of murder. Cartmell depicts the anger that is never very far from the surface in lots of alienated young men and Leroy is very much a victim of his environment. He is prone to violence and his moral compass is somewhat skewed. The question the reader is forced to address during the course of the novel, however, is whether, just because he is an angry and not a particularly pleasant individual, does that make him a murderer?

An added layer to the story arrives in the shape of Sgt Billy Williams, who works for the military police. Emma and Billy have a past history from the train hijack and are clearly attracted to each other. Cartmell leaves the reader with the idea that, as the series progresses, so too will their relationship.

I enjoyed Past Judgement as I think it is a very relevant reflection of our society and Cartmell obviously has a personal knowledge of the prison system. If you like a novel that makes you think then you should give Past Judgement a try.
Posted by Unknown at 10:50 No comments:

The Blake Mistake by I. C. Camilleri 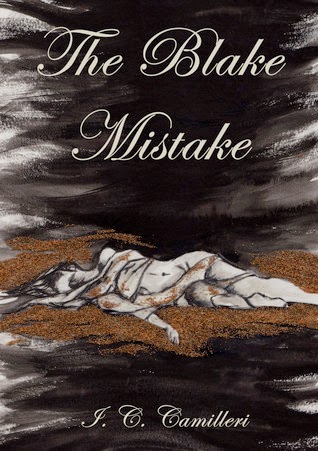 The Blake Mistake is the first book I have read by I. C. Camilleri although it is actually the third book in the Blake series. I enjoyed it as a standalone even though there are references to events that have obviously taken place in the earlier books which left me with some unanswered questions. That said The Blake Mistake is a strangely compelling read that hooks you in and keeps you wanting to know how events are going to unfold. The book is a paranormal, romantic mystery and centres on the Blake family. In particular, Ben Blake who is psychic and his sister Emma, who is married to the very troubled cardiac surgeon, Jake Snell who also happens to be the Earl of Yorkley and an amnesiac.

Ben Blake works as an agent for the government and uses his psychic powers to prevent terrorist attacks. The problem is by changing the future Ben unwittingly brings trouble for his nearest and dearest, in particular Emma. Jake has no memory of his childhood and when Emma finds an old diary she reads it and is able to gain some insight into his traumatic past, which in turn causes problems for her in the present.

All of these events collide and cause a race against time mystery which is actually very exciting. Camilleri somehow manages to make the incredible seem credible and I found myself completely caught up in the story. She creates a mystery with so many layers that by the end I was suspecting almost every character in the book of wrong doing.

I have to admit the genre is not my usual preference – it has lots of paranormal occurrences and quite a lot of erotica, which I found a little bit sexist but I’m sure lots of readers will enjoy. If you like a story that keeps you guessing right until the very end then you should give this one a try.
Posted by Unknown at 15:36 No comments:

The Screen Conspiracy by Maxwell Black 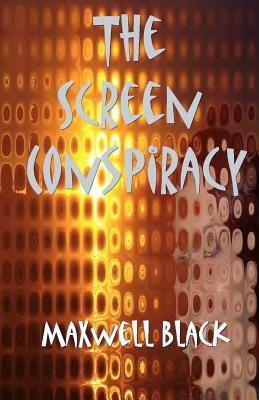 In Jack Halpin, Maxwell Black has created a character who most people of a certain age will relate to. In an ever changing, technical world, Jack finds himself adrift as his career has hit the skids and he is constantly sidelined before eventually being given a ‘token’ job in the computer division of his company. It’s whilst there that he stumbles upon evidence that a group of powerful people, including members of the government, are blackmailing senators into voting for anti-terrorism laws by planting incriminating evidence onto their computers. As a result of his discovery, Jack finds his life in danger and because there are so many influential people involved in the plot, he has to rely upon his closest of friends for help.The novel is action packed with lots of surprises and danger looming seemingly from every direction. However, Black manages to make his story credible and relevant. In a world climate that is dominated by a fear of terrorism, it is not hard to imagine politicians manipulating this fear to their own ends. It also doesn’t seem inconceivable that computers could be hijacked to discredit people’s reputations.Jack is an unlikely hero in that he is a middle-aged man, disappointed in his career and trapped in a loveless marriage. His relationship with his son is distant and his only real companionship comes from his old friends at the gun club, where he likes to spend his spare time. It’s these same friends to whom he turns when he needs help. I enjoyed this novel and, if you like an intriguing plot that will keep you guessing until the end, then I recommend you give it a try.
Posted by Unknown at 14:40 2 comments:

The Dogs of Mexico by John J. Asher 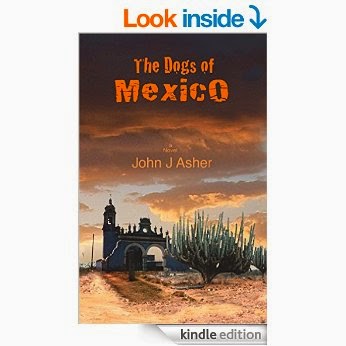 After a family tragedy, CIA operative Robert Bonhert, disappears and starts a new life in Florida. However, several years later, he is located by a former colleague and blackmailed into participating in a scheme to smuggle diamonds out of Mexico. Needless to say, the scheme does not go to plan and what follows is a white knuckle ride style adventure, where anything can happen.

Early on, Asher introduces us to a cast of characters who lulled me into thinking the story was going to be little more than a mad-cap caper. For instance, some of the people Robert has to deal with on his travels are a bitter German drunk, a stroppy teenage wild child, a transvestite and a psychotic midget. There is a shocking incident not too fat into the story, however, which lets the reader know in no uncertain terms that this is, in fact, a gritty, hard-hitting tale and, from that point on, the action doesn’t stop.

We are taken on a relentless, action fuelled read complete with car chases, gun fights and stand-offs. There are times I feared the action was so full on, the story was in danger of careering out of control but Asher manages to hold a steady course despite the breakneck speed he employs. Alongside the action, we have the side story of Robert’s relationship with Ana, a troubled woman who he rescues from her abusive partner, Helmut.

I enjoyed the story and found myself anxiously reeling from one near miss to another as Robert tries to navigate his way through Mexico. Asher’s use of the landscape and poverty of Mexico is particularly effective. He creates an intoxicating vision of hell which heightens the tension even further. If you like adventures that are gritty and pull no punches then The Dogs of Mexico is definitely one for you.
Posted by Unknown at 03:00 No comments: